Pirates of the Caribbean: On stranger tides 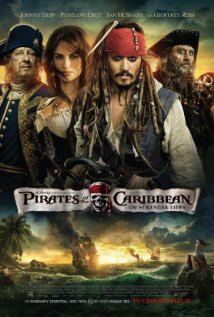 The fourth film in the Pirates of the Caribbean series opens with Spanish fishermen finding a very old man entangled in their fishing nets. When the Spanish commander learns that the old-man is a two-hundred year-old survivor from an ill fated expedition to find the legendary Fountain of Youth, the commander gives orders to set sail on the next morning’s tide.

Meanwhile, Jack Sparrow (Johnny Depp) is on a one-man mission to rescue a member of his crew but is captured and brought before King George II (Richard Griffiths). He discovers that Captain Barbossa (Geoffrey Rush) is now a captain in the King’s navy and that they are after Jack’s map for the location of the Fountain of Youth.

Jack manages to escape from the King’s custody but becomes involved in a duel with a strange man who claims to be Jack himself, but turns out to be an old flame named Angelica (Penelope Cruz). Jack’s romantic interlude is interrupted when he is pursued and knocked unconscious by unknown foes.

When Jack wakes up he finds that he is at sea aboard a ship captained by Blackbeard the pirate, who turns out to be Angelica’s father. Sparrow now has to lead Blackbeard to the Fountain of Youth with Barbarossa and his men, and the Spanish navy also desperately seeking the fabled fountain.

Much of the violence in the film is stylised and at times slapstick. However, the film does contain a few scenes where the violence depicted is of a more brutal nature. Examples include:

The film contains a host of threatening pirates that younger children may find scary.

Some younger children in this age group may also be disturbed by some of the above mentioned scenes.

There is some low-level coarse language and name calling in this movie, including:

Pirates of the Caribbean: On stranger tides is an adventure fantasy film targeting an audience from adolescents upwards. Many scenes are too violent and scary for children under 12

The main message from this movie is to live life for the moment.

Parents may also wish to discuss the way in which the pirates treated the mermaid and what it showed about their attitude to her.