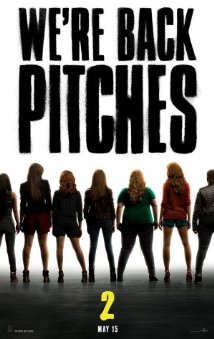 Not recommended under 14; parental guidance recommended 14-15 due to sexual references and coarse language

Pitch Perfect 2 is a comedy-musical that follows the all-female a cappella group, the Barden Bellas, as they take to the international stage. Despite having won three previous championships, the girls tarnish their reputation when one of their performances involves an embarrassing wardrobe malfunction for Amy (Rebel Wilson). As a result, the girls are suspended from competing nationally by Barden University. However, the Dean cannot prevent them from accepting the invitation they have already received to compete in the World a Cappella Competition. No American team has ever won, and the girls are told that they either win the competition, or suffer the breakup of their team for good.

The team is eventually joined by a new girl named Emily (Hailee Steinfeld) – her mother was a Bella, and she is passionate about both singing and writing music. Meanwhile, one of the most talented members Bec (Anna Kendrick) is trying to juggle her new internship with her commitments to the group.

The group most likely to win the World Competition is a German group called Das Sound Machine and the Bellas soon discover that they are formidable opponents. The girls realise that a lot of teamwork and commitment is needed to compete at international level.

There are frequent sexual references in the film, including:

There is some coarse language throughout the film, including:

Pitch Perfect 2, the sequel to Pitch Perfect, is an inspiring story about a group of young girls who lose their way, both professionally and personally. As a result of emotionally drifting apart from one another as their college years draw to a close, the Barden Bellas find themselves struggling to perform as a group. The film highlights that often the real issue that needs to be addressed may not be what it initially appears to be. The girls begin to believe they are bad singers, but they really just need to rediscover their voice together as a team. The film also demonstrates the importance of friendship, and of not being afraid to reach for the stars.

The film is likely to appeal to tweens and teens, particularly those who were fans of the first film, but it is not recommended for children under 14. Parents may be concerned about the coarse language and frequent sexual references.