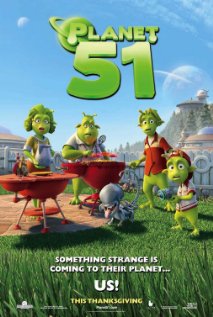 Not suitable under 8; parental guidance to 13 (violence and sexual references)

Planet 51 is an animated film which opens with some depictions of the idealistic suburban life of the green aliens on Planet 51, a world curiously similar to 1950s America in terms of styles and attitudes.  Clothing, vehicles, household appliances and architecture all reflect the fashions of the mid 20th Century, as does the almost xenophobic fear of outsiders.

One afternoon, Planet 51’s peaceful existence is interrupted by the arrival of human astronaut Captain Charles Baker (voice of Dwayne Johnson), who had believed that the planet was uninhabited.  After their initial shock, the locals react with hostility, calling in military strongman General Grawl (Gary Oldman) and his taskforce to deal with the situation.  Meanwhile, Captain Baker fortuitously meets a conservative teenager, Lem (Justin Long), who eventually vows to help the astronaut return to his spaceship and escape.

Other characters are Lem’s younger brother, Eckle (Freddie Benedict); Neera (Jessica Biel), whom Lem would like to date if he had the courage; Glar (Alan Marriot), a guitar-playing protester; and mad-scientist Professor Kipple (John Cleese).

Children in this age group are also likely to be disturbed by some of the above scenes.

Products are displayed or used in this movie include:

There is some implied nudity or sexual activity in this movie, including:

There is some coarse and threatening language in this movie, including:

Planet 51 is an animated science fiction film which appears to be aimed at children, but has an unusual combination of features.  The film contains a number of clever references to 1950s American pop culture and the dominant political landscape of this era.  In some ways, the plot could be seen as challenging such idealised views about life and the notion of the “Other”, especially in the wake of 9/11.  However, these elements are not linked together in any coherent fashion.  A number of viewers may not even pick up the subtle references which will be entirely lost on the targeted pre-teen audiences.

Values in this movie that parents may wish to reinforce with their children include the acceptance of people who are different.