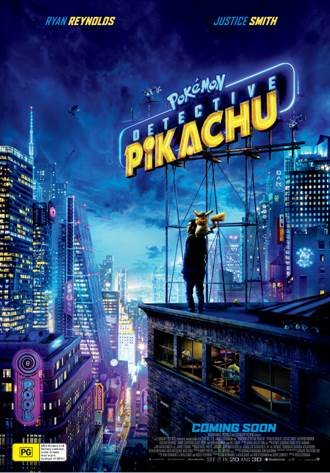 Not recommended under 5, parental guidance to 10 (frightening scenes, mild themes and violence).

Tim Goodman (Justice Smith) receives news that his estranged father and police officer, Harry Goodman, has died in a mysterious car accident.  When Tim arrives to collect his father’s personal belongings, he discovers that there may be a lot more to the story than he has been told; including why his father’s Pokémon partner ‘Pikachu’ (voiced by Ryan Reynolds) has lost its memory, and why on earth this Pokémon and Tim can communicate with each other.  After teaming up with the wisecracking Pikachu and fast-talking journalist intern Lucy (Kathryn Newton), the trio uncover clues that lead them all the way to an evil plot to destroy the Pokémon-Human alliance as they know it.

Death of a parent; betrayal of trust; friendship.

There are some mild references made to the use of substances in this movie, including:

Pokémon: Detective Pikachu is a visually fantastic live action film based on the video game of the same name.  While slightly thin on plot, this film is a visually exciting and an easy watch for children and adults alike.  Parents should be conscious that many of the Pokémon may frighten or distress younger children under 5 as they are not always cute but can be a little more ‘monster-like’ and fierce. Also, some of the subtle jokes made by Ryan Reynolds as Pikachu, whilst aimed at adult viewers, may be a little on the nose.  This is most likely to be enjoyed by children over the age of 8, with parental guidance until age 10.