Pokémon the Movie: The Power of Us 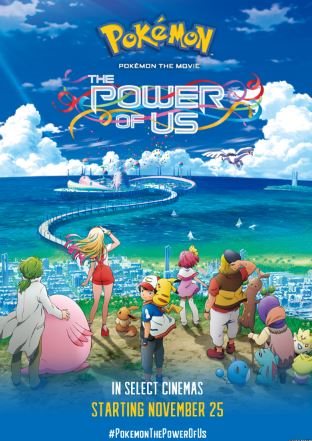 Not recommended under age 6, Parental guidance to age 10 due to animated violence.

Pokémon the Movie: The Power of Us is the 21st movie in the Pokémon movie series. Longstanding character Ash (voice of Sarah Natochenny) and his trusty Pokémon ‘Pikachu’ (voice of Ikue Otani)  are visiting Fula City, a futuristic wind-powered city with a dark and mysterious past. The wind that powers Fula City is sustained through a reverent relationship with a giant Pokémon, ‘Lugia’, who visits the city each year during the Wind Festival. However, the arrival of the notorious ‘Team Rocket’ in the midst of the festival starts a chain of events that threaten disastrous consequences. Ash and Pikachu join forces with a team of unlikely heroes, who work together to save the city, strengthened by the connection between humans and Pokémon (‘Pokémon Power!).

Although there are no sexual references in this film, there are some sexualised female characters in this movie, including:

Pokémon the Movie: The Power of Us is a visually stimulating, fast-paced animated action film that will appeal to children as well as die-hard Pokémon fans. It has positive messages about respect for nature and the importance of working together as a team.

The main message from this movie is that working together is more powerful than acting alone. The relationship between humans and Pokémon could be seen as symbolic of our relationship to animals and the environment.