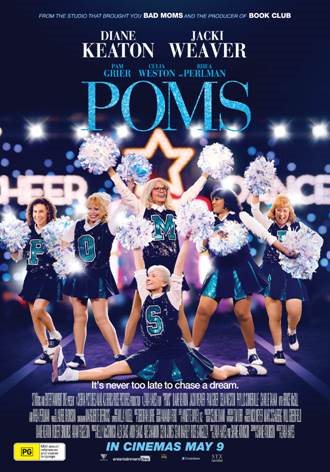 Not recommended under 13; parental guidance to 15 (Adult themes and lack of interest for younger viewers).

Martha (Dianne Keaton) moves into Sun Springs Retirement Village to spend her last days there. She’s dying from cancer, but she doesn’t want anyone to know this. Sun Springs is run by the officious and small-minded Vicki (Celia Weston) who insists that all residents belong to a club of their choice. Martha doesn’t want to join any of the existing craft clubs, choirs or golfing clubs and so, with her fun-loving neighbour Sheryl (Jacki Weaver) they form a cheerleading club. Vicki and her narrow circle object to the cheerleading club on the grounds of immorality but Martha and Sheryl manage to find six other women who are prepared to flout the Village rules. These women, most of whom have mobility issues, go on to compete against girls of a much younger age, to the astonishment and enjoyment of audiences.

There is some verbal and psychological violence (bullying), and some physical violence in this movie including:

In addition to the above-mentioned violent scenes and scary visual images, there are some scenes in this movie that could scare or disturb children aged five to eight, for example:

Poms is a comedy/drama that shows that older people can still have fun and enjoy themselves. It challenges the perception of old people sitting around, doing nothing and generally living a dull life. It also challenges narrow-minded concepts in a humorous way. Due to its subject matter however, it isn’t recommended for children under 13.

The main messages from this movie are that you can still enjoy yourself as you grow old and life doesn’t stop when you reach a certain age.