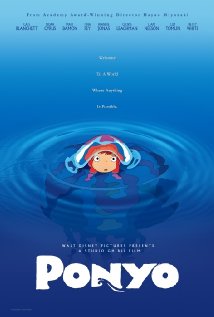 One day while exploring the ocean, Ponyo is trapped inside a discarded glass bottle and washed ashore to be found by a five year old boy named Sosuke (Frankie Jonas). Sosuke lives with his mother Lisa (Tina Fey), who works at a senior citizens centre and his father Koichi (Matt Damon), who is a ship’s captain. As Sosuke breaks open the glass jar to free Ponyo, he cuts his finger producing a drop of blood which Ponyo licks, causing Sosuke’s finger to instantly heal. Sosuke and Ponyo immediately form a bond of love, but the friendship is short lived because Fujimoto uses his sorcerer’s powers to capture Ponyo, leaving Sosuke devastated.

The drop of blood ingested by Ponyo causes her to develop strong magical powers which enable her to transform into a little girl and escape from her father. However Ponyo’s use of magic causes an environmental imbalance resulting in storms, tidal waves, flooding and the appearance of prehistoric marine creatures. During a violent storm we see Ponyo riding the backs of giant waves as she chases after Sosuke and his mother (who are trying to outrun the storm). Ponyo is eventually reunited with Sosuke as he reaches the safety of his house.

Fearing for the safety of the residents of the senior citizens centre, Sosuke’s mother leaves Sosuke and Ponyo at home and goes to attend to the senior citizens. The following morning the storm has cleared, but Sosuke’s village is left submerged in flood waters. Finding no sign of his mother, Sosuke accompanied by Ponyo, braves the flood waters to go in search of her. Meanwhile, Fujimoto has contacted Ponyo’s mother, the sea goddess Gran Mamare (Cate Blanchett) to help put the planet back in order. Gran Mamare informs Fujimoto that if Ponyo becomes permanently human the world will revert back to normal but that in order to do this Sosuke must prove his love for Ponyo.

There is no deliberate interpersonal violence in this movie, but several scenes where the characters are hurt or in peril, including:

In addition to the above-mentioned scenes, there are some scenes in this movie that could scare or disturb children under the age of five, including the following:

Ponyo is an animated fantasy film which is superbly animated (hand drawn/watercolour) and likely to be entertaining for children, particularly between the ages of five and ten years, but also for older children and adults. Younger children will find the film’s lead characters (Sosuke and Ponyo) both likable and inspiring.