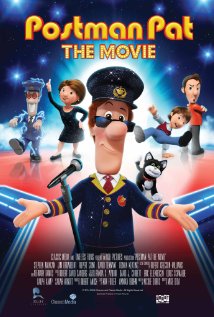 Ideal for 5- 10 year olds, parental guidance recommended for under 5s due to some possibly scary scenes.

Based on the popular children’s television show of the same name, this movie follows friendly postman, Pat Clifton (voiced by Stephen Mangan) who promises his wife Sara (voiced by Susan Duerden) a trip to Italy when he gets his annual bonus.

When Pat’s new boss cancels all bonuses Pat decides to audition for the talent show You’re the One to win Sara her dream holiday.

But while Pat is busy with his singing success, his new boss builds an army of robot postmen that threaten his friends and family. Pat must decide what is more important, his success or his family.

Simon Cowbell (the judge from the talent show) uses language such as “tatty country bumpkins” and other similarly rude comments but not course language. Simon is often mean to the talent contestants and this rude and sarcastic behaviour may be mimicked by children.

Postman Pat: The Movie is a fun and charming film about the problems that come with success and fame, and the importance of cherishing human interactions. The film is ideal for children aged 5- 10. While some older children may find the film boring, the humour is also likely to entertain adults. Parental guidance is recommended for younger children as they may find the robots frightening.

This movie could also give parents the opportunity to discuss with their children the importance of not spending too much time watching screens and playing with technological devices as it detracts from important human interaction.