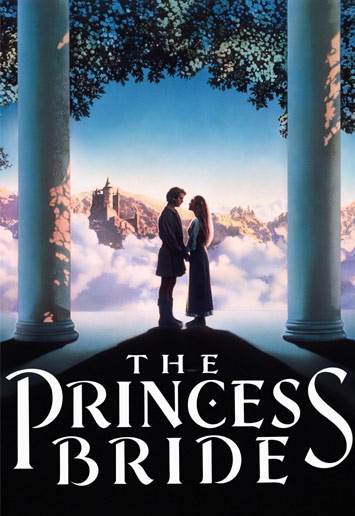 Originally released in 1987, The Princess Bride is based upon the 1973 novel of the same name by William Goldman. A young boy (Frank Savage) is sick and home from school. His grandfather (Peter Falk) has come to his bedside to keep him company and is reading aloud to him from a book. Initially, the boy is disgusted because he thinks the story is going to be all about kissing and romance, but gradually he is drawn deep into the tale and begs his grandfather to continue. The film flicks back and forth between this imaginary fairy-tale universe and the boy’s bedroom. The story is about a young woman called Buttercup (Robin Wright) and her true love, a handsome farm boy called Westley (Cary Elwes). When Westley is captured by the Dread Pirate Roberts and Buttercup is forced to become engaged to Prince Humperdinck (Chris Sarandon), all hope of reunion is lost. Before the royal wedding, three outlaws kidnap Buttercup and steal her away. They soon discover that they are being followed by a mysterious masked man. They try to outrun him using their skills of sword fighting, brute strength and superior intellect, but he manages to beat them all and capture the princess himself. Of course, Prince Humperdinck and his entourage are also in hot pursuit, determined to bring Buttercup back to be married. The masked man and Buttercup must outrun them all to save Buttercup from marrying a man who is not her one true love, despite many a perilous moment.

The Princess Bride is a classic fairy-tale adventure story with a great storyline for kids to enjoy but also a lot of wit, humour, and farce to entertain adults on a different level. Parents should be aware that there are a couple of scenes which are very scary for younger children (the eel attack, the fire-swamp rodents, and the torture scene) and could lead to some disturbed sleep! Even if you loved this film as a child, it is definitely worth waiting until your children are at least nine before enjoying this with them. It is also worth mentioning that, although easily disguised within the fairy-tale context, this film portrays women in an outdated, powerless and objectified manner. This could be worthy of a discussion.

The main messages from this movie are that true love will never die, that honour is everything and that vengeance can rule your life.