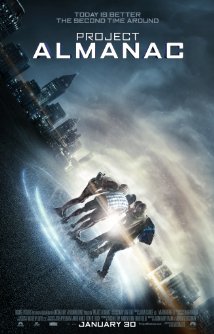 Not recommended under 12, parental guidance recommended 12-15 due to sexual references and coarse language.

David Raskin (Jonny Weston) is a very bright student who has just been accepted into MIT. The scholarship, however, doesn’t pay for much and he needs to find a way to make some money to prevent his mother selling the home to support him. He looks in the attic through his deceased father’s belongings and discovers almost complete plans for a time machine.

Together with his friends Quinn (Sam Lerner) and Adam (Allen Evangelista) David completes the construction of the time machine hoping to make some money from the discovery. David’s sister Christina (Virginia Gardener) films the proceedings and joins them when they decide to put it to the test. They ‘jump’ into a past time and find they can use the machine to their own advantage. David brings Jessie (Sofia Black-D'Elia) into the project and uses the time machine to correct mistakes he makes in their relationship. Things start to go badly awry however, as they realize that changing the past affects the present.

Products displayed or used in this movie include:

Project Almanac is a teenage sci-fi movie filmed as ‘found-footage’, which brings a greater sense of reality to the events. It features time travel which is used mostly for selfish reasons such as winning the lottery or getting better grades at school, but the film is entertaining and will appeal to older teens. The film is not recommended for children under 12 due to sexual references and coarse language, and parental guidance is recommended for the 12-15 age group. Some viewers might be affected by the hand-led camera footage.

The main messages from this movie are the importance of working together as a team and the possible consequences of doing things alone.

This movie could also give parents the opportunity to discuss the real-life consequences, of stealing school property. Parents may also wish to discuss what would happen if we were able to relive some important events in our lives