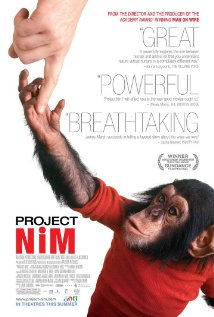 Not recommended under 14, PG to 15 (Distressing themes; Violence; Coarse language)

Project Nim is a documentary which details the true life story of Nim Chimpsky, a chimpanzee who was at the centre of a controversial 1970‘s experiment to see if a chimpanzee raised as a human child could develop human language.

Herbert Terrace, a behavioural psychologist from Columbia University, was the director of Project Nim and is seen throughout the movie as instrumental to the decisions that were made for Nim and his future welfare.  The movie begins at the commencement of Herbert’s  experiment with the removal of Nim from his biological mother.  Nim is sent to an ex-student of Herbert’s, Stephanie LeFarge, who is a mother of three children and step-mother to four.  Stephanie rears Nim as her own child for a number of years.  She breast-feeds, loves, nurtures and educates him until Herbert becomes concerned that Nim’s time with Stephanie and her family is not following appropriate scientific parameters.

Herbert moves Nim to a mansion in the country where he employs a number of dedicated sign language teachers and carers to take over the care of Nim..  Nim continues to astound the science world with his growing acquisition of language but his burgeoning adolescence sees him become more territorial, more sexualised and more aggressive towards his carers and teachers.  After a violent attack on one of Nim’s closest teachers, Laura-Ann Petitto, his future becomes uncertain.

Five years after Nim was removed from his natural surrounds, Herbert returns him to his birth place, a university research facility.  While there Nim meets pyschology masters graduate, Bob Angelini, who takes an active interest in his happiness and welfare.

In addition to the above-mentioned violent scenes, there is a constant emotional intensity in the film and a number of scenes that could disturb children under the age of five, including the following:

Children in this age group are also very likely to be disturbed by the above-mentioned scenes.

Younger children in this age group are also likely to be disturbed by some of the scenes described above.

Project Nim is a documentary movie which explores the debate of nature vs nurture through the life of Nim, a chimpanzee who was raised as a human child for a controversial research project.

This movie could give parents the opportunity to discuss with their children attitudes and behaviours, and their real-life consequences, such as: