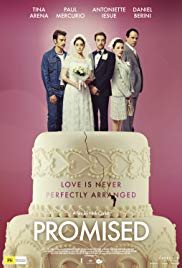 Not suitable for children under 7 and parental guidance to 8 (Nudity. Sexual references. Coarse language)

In Melbourne in 1953, two close Italian families come together to celebrate the birth of Angela (Cinzia Meddis). In line with the old Italian tradition of ‘combinare’, Angela's father, Sal (Paul Mercurio) and Joe (Mirko Grillini), father of 5-year-old Robert (Dominic Foti), promise their children in marriage.

21 years later, Angela (Antoniette Iesue) is an ambitious university student and has a boyfriend who she keeps secret from her parents. As Robert (Daniel Berini) returns to Melbourne after studying law at Oxford, the childhood friends realise that, expecting the promise is kept, their fathers have arranged their wedding to take place just a few weeks later. Feeling the immense pressure of tradition and fearing the consequences of disappointing their families, Robert and Angela have to make a life-changing decision and learn that love, like life, can never be perfectly arranged.

Loosely based on true events, Promised is a charming Italian-Australian romantic drama, likely to appeal to adults and families with teenage children, particularly those who can relate to the cultural traditions. Some nudity, sexual references, and infrequent coarse language make it unsuitable for children under 7 and parental guidance is recommended for children under 9. The themes will most likely lack interest to a pre-adolescent audience.

The main messages from this movie are that life and love work in mysterious ways, that open and honest communication are of utmost importance and that it is important to give people and situations a chance.