Pursuit of Happyness, The 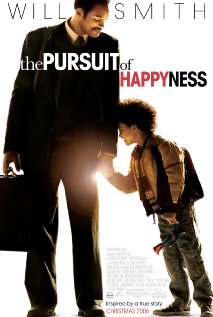 The Pursuit of Happyness is based on a true story about a family trying to make a success of their lives. Chris Gardner (Will Smith) and Linda (Thandie Newton) are a couple with a little boy also named Christopher (Jaden Smith). The couple have spent their life savings buying into company that manufactures medical scanning devices and it is Chris’s job to sell these. He has great difficulty selling them and the family are behind on their rent and have little money. Linda has to work extra shifts just to make ends meet. This is causing more and more stress in their relationship.

One day while racing from one sales appointment to another Chris sees a man get out of a red Ferrari. When he asks what this man does for a living he finds out the he is a stockbroker and that the position does not need a college degree. You need to be good at maths and good with people. Chris decides if this is all that is needed then he can do this too. His observation at the time is that all the stockbrokers look happy.

Chris decides to study to be a stockbroker but, after Linda leaves, finds himself as a single parent. Through great determination he manages to get an internship and has to balance lack of salary, looking after a small child and homelessness with studying and trying to reach his ultimate goal.

There is no physical violence of concern in this movie, but there are angry confrontations between various members of the family.

There are some scenes in this movie that could scare or disturb children under five, including the following:

It is unlikely that anything in this movie would scare or disturb children over the age of 13.

The main message of this movie is that if you believe you can do something and have a goal, stick to it and follow it through.