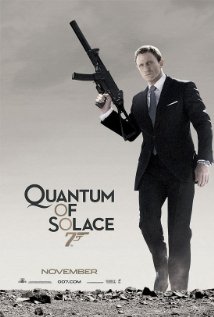 Not suitable under 13, not recommended to 15 due to complexity of plot, violence and sexual references.

Quantum of Solace begins hours from where Casino Royale ended. James Bond (Daniel Craig), pursued by villains in cars at high speed, brings in Mr. White (Jesper Christensen) for questioning. Bond and M (Judi Dench), interrogate Mr. White in a bid to uncover those responsible for Bond’s betrayal and discover that the previously unknown organisation that White works for is both powerful and worldwide.

An investigation of an MI6 traitor leads Bond to Haiti where he encounters the mysterious Camille Montes (Olga Kurylenko), a woman with her own agenda and vendetta. Camille leads Bond straight to Dominic Greene (Mathieu Amalric) a ruthless businessman posing as an environmentalist for an organisation called Green Planet. We learn that Dominic is conspiring with an exiled Bolivian dictator called General Medrano (Joaquin Cosio) to overthrow the current Bolivian government. He is also working with high up officials in both the British and US governments, who know that he is a villain, but choose to do business with him regardless.
Bond chases the criminals across Austria, Italy and South America, becoming a renegade MI6 agent when he refuses to obey M’s orders to abandon the chase. Along the way Bond enlists the help of an old friend Rene Mathis (Giancarlo Giannini) and then teams up with Camille, while contending with Agent Fields (Gemma Arterton) who arrives to escort him back home

In addition to the above-mentioned violent scenes, there are some gruesome images that could scare or disturb children under the age of five, including the following:

Some children in this age group may also be disturbed by the above mentioned scenes.

There is some coarse language and putdowns in this movie including:

Quantum of Solace is definitely adult viewing. Unlike other Bond films, this film is dark and ruthless with Bond stealing, lying, manipulating and killing without hesitation or remorse. The plot is complex, making it difficult and confusing for viewers under thirteen and much of the film’s dialogue sounds muffled, or lacking in clarity making it difficult to understand.
The main messages from this movie are that