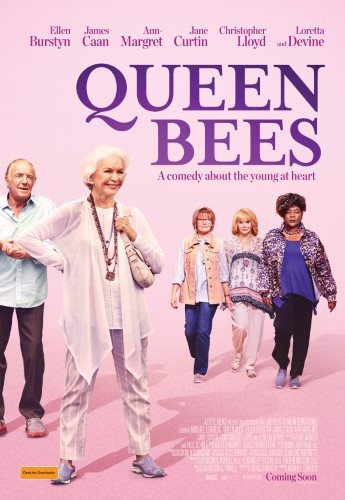 Not suitable under 13; parental guidance to 15 (adult themes, drug use, sexual references, lack of interest for younger viewers)

Helen Wilson (Ellen Burstyn) is a fiercely independent widow who is determined to remain in her own home, despite her daughter Laura’s (Elizabeth Mitchell) best efforts to put her into a senior’s home. Helen is in the early stages of dementia and repeatedly locks herself out of her house. On one occasion, Helen leaves a pan on the stove which starts a fire in the kitchen. Helen reluctantly agrees, therefore, to go into the home while her house is being repaired.

Once in the senior’s home, Helen encounters a group of mean women, generally known as the ‘Queen Bees’. Janet (Jane Curtin) is the leader of the group and a particularly embittered, unfriendly person. Sally (Loretta Devine) is quite gregarious, however, and is keen to befriend Helen, much to Janet’s dislike. Helen is a fearless person and is quite a match for the unlikeable Janet and she soon becomes accepted into the group. While at the home, Helen also meets Dan (James Caan), a widower who becomes quite enamoured with her. However, things are not all as they seem and Helen encounters a wide range of grief and happiness during her stay.

Queen Bees is a romantic comedy about ageing while still enjoying life. The film is funny and serious at the same time, without being overly sentimental, and likely to appeal to a more mature audience. It is not suitable for children under 13 years, and parental guidance is recommended for children aged 13 to 15 due to adult themes and content.