Quiet Girl, The (An Cailín Ciúin) 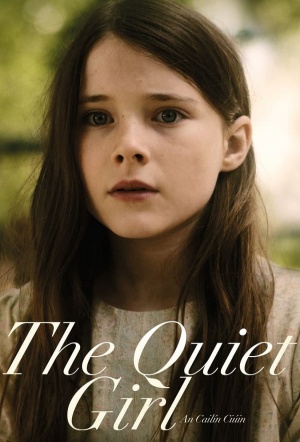 Not suitable under 13; parental guidance to 15 (coarse language, themes). May also lack interest under 16 due to subtitles.

Nine year old Cáit (Catherine Clinch) is unloved, neglected and misunderstood by her family. Her father drinks and gambles, while her exhausted mother struggles to feed the family and her sisters ignore or insult her. Cáit is sent to live with distant relatives for the summer, while her mother prepares for the birth of yet another baby. It is while living on the farm with Eibhlín (Carrie Crowley) and Seán (Andrew Bennett) that Cáit learns what it is like to be loved and cared for. Cáit immediately steals Eibhlín’s heart and the woman lavishes her affection on the young girl, while Seán takes longer to get used to having her around. Meanwhile, Cáit is left to wonder why there are airplanes and cars on the wallpaper in the room where she sleeps and a wardrobe full of little boy clothes in a house that has no children. Eibhlín and Seán thought they knew exactly what they were doing by taking in Cáit but even they were unaware of the transformative power this quiet girl would have upon their lives and upon their hearts.

Poverty; Child neglect; Separation from family; Death; Grief and being misunderstood and unappreciated by those meant to love you.

The Quiet Girl (An Cailín Ciúin) is an Irish-language film with English subtitles, based on the Claire Keegan’s novella, Foster. The film is simply and exquisitely done. Due to the language and subtitles, this is not a film aimed at children but one that will be appreciated by older, mature audiences.

The main messages from this movie are that love and kindness are never wasted and together they make all the difference.