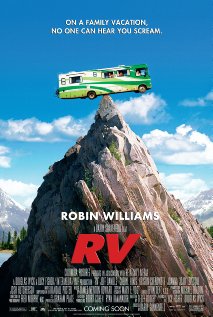 Bob Munro (Robin Williams) and wife Jamie (Cheryl Hines) are a fairly typical, American couple with teenage kids, 15 year old Casey (Joanna ‘Jo-Jo’ Levesque) and 12 year old Carl (Josh Hutchison) and with whom interaction is fairly limited. Bob promises to take his family on a holiday to Hawaii, but has to change plans when he is unable to convince his boss to give him any time off work. As he has to attend a conference in Colorado, he convinces his family that a camping holiday in an RV (recreational vehicle) to Aspen Springs, Colorado would be a lot of fun and would give them some quality time together. The holiday is a disaster from the start, including their attempts to extricate themselves from the Gornickes, an all American, annoyingly wholesome family they have met along the way.

There is some slapstick violence in this movie, including:

Parents are reminded that although comic violence may appear benign, and children usually enjoy it, over-exposure to comic violence can lead young children to believe that violence doesn’t really hurt.

In addition to the above-mentioned slapstick violence, there are some scenes in this movie that could disturb children under the age of five, including:

There is nothing in this movie that would disturb children over the age of eight.

There is some drinking of alcohol at home and at a party.

There is some coarse language in this movie, including several instances of ‘Oh my God.’

R. V.: Runaway Vacation is a light-hearted comedy about the tenuous relationship between parents and their teenage children. It is quite a good family film with Robin Williams applying his own brand of comic humour. The take home message is that family is more important than a career and that it is necessary to spend time together and talk to each other. The movie also shows that having fun doesn’t need to cost a lot of money but can come from simple pleasures.

Parents may wish to reinforce with their children the message about the importance of family.

Parents could also take the opportunity to discuss with their children attitudes and behaviours, and their real-life consequences, such as.