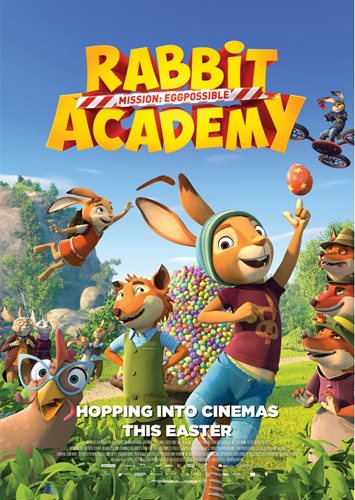 Not suitable under 8; parental guidance to 10 (language, themes, violence)

Students of the Rabbit Academy eagerly await news of who will be chosen to become Master Rabbits. When the golden egg finally reveals that one of the chosen is a city rabbit named Max (voice of Callum Maloney), not everyone is happy. Emmy (voice of Lucy Carolan), however, couldn’t be more pleased and can hardly wait until she can see her friend again. Meanwhile, in the city, Max defends a small rabbit who is being bullied by Leo (voice of Cameron Simpson), a nasty, selfish, self-made media sensation. When Max accidentally destroys the stage for Leo’s next social media broadcast, and ‘borrows’ his bike, Leo vows revenge and follows Max to the countryside. Here, Leo falls into league with a dysfunctional family of foxes who want nothing more than to outsmart the rabbits and become ‘Easter foxes’, beloved by all. Leo, on the other hand, wants to sabotage Easter and destroy all the eggs the Rabbit Academy has been preparing. When Ferdinand (voice of Jonas Elkhawad), the cleverest and kindest of the foxes, learns what Leo is really planning his family won’t believe him, so he heads to The Rabbit Academy to offer his services to help save the holiday. But will they be able to trust him and will working together be enough to save Easter?

A fox picks up a young rabbit and everyone turns on him, ready to chase him down and attack.

Rabbit Academy: Mission Eggpossible is an animated adventure with bright, colourful graphics and a largely predictable plot. The storyline and animation style lends itself to a younger audience but the language and name calling is surprising in such a film as it is largely inappropriate for younger viewers.

The main messages from this movie are that trust and unity will give you and your community a strength you never knew you had and a power you never dreamed you could possess.