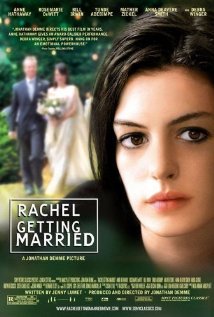 Not recommended under 15 due to themes and drug references.

Kym (Anne Hathaway) returns home from a rehab centre to help celebrate her sister Rachel’s (Rosemarie DeWitt) wedding. Kym is consumed with guilt, self-loathing and pity, partially due to her dysfunctional family and mainly due to a tragic event that she caused earlier in her life, while driving under the influence. Kym finds it difficult to move outside her own problems and contribute in any positive way to the coming event.  Instead, her attention-seeking behaviour causes a high level of friction and raises unresolved family animosities.

Drug and alcohol addiction; death caused by driving under the influence; dysfunctional families.

Rachel Getting Married is a perceptive look at family relationships and problems but is most suited to viewers over 15. The acting is superb but some viewers might find the filming with a hand-held camera problematic.
The main message from this movie is the destructive effect that drugs and alcohol can have on a person’s life.
Values in this movie that parents may wish to reinforce with older children include the importance and strength of families through good and bad times.

This movie could also give parents the opportunity to discuss with older children attitudes and behaviours, and their real-life consequences, such as the need to solve problems before they spiral out of control.