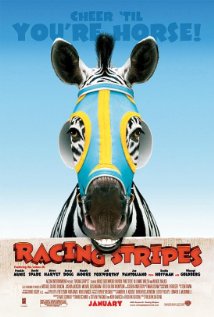 A travelling circus troupe get caught in a storm at night and accidentally leave a zebra foal behind on the road, separating him from his parents. A kindly farmer and former racehorse trainer, Nolan Walsh, happens to drive by and rescues the young zebra. To the delight of his daughter, Channing, the farmer agrees to keep and raise the foal, who has been given the name Stripes. Stripes gains a number of other surrogate parents, by way of the other farmyard animals, who encourage his desire to become a racehorse.

Years pass and the now adolescent Stripes has ambitions to race in the Kentucky Open, not realising he is in fact a zebra. He is constantly rejected, bullied and teased by the horses in the neighbouring racehorse training stables, but is undeterred and tries harder to reach his goal. He develops a crush on Sandy, the equestrian-trained filly next door.

Sixteen year old Channing Walsh (whose own mother died as a jockey in a race accident) must also overcome her father’s objections to her riding horses, in order to train and race Stripes in the big race. She faces additional objections and taunts from her father’s former boss and competing racehorse owner, Clara Dalrymple.

Further revelations and incidents gives rise to a loss of self-belief for Stripes, and threatens to undo all the gains of his hard work and training. His friends band together to give Stripes and Channing a chance to fulfil their ambitions and dreams.

In addition to the above mentioned scenes, the following scenes could disturb some very young children:

Children over the age of eight would not be scared by this movie.

During the Kentucky Open, sponsorship boards from Kodak and Fed Ex express were noticeable.

While there is no coarse language, the film contains many put-downs

The film’s message is that it doesn’t matter who you are or what others say, if you have enough self belief, courage and put in the hard work, you can achieve your dreams.