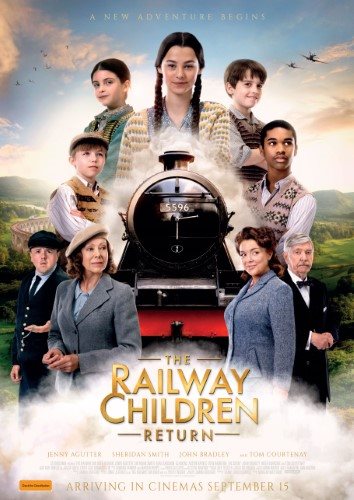 Not suitable under 8; parental guidance to 10 (violence and scary scenes)

Set in 1944, five years into World War II, children are being evacuated from large cities to rural areas for their protection. Lily (Beau Gadsdon), Pattie (Eden Hamilton) and Ted Watts (Zac Cudby) are three siblings who are tearfully sent by their mother from Salford/Manchester to Oakford/Yorkshire, by train, along with many other children. The siblings are met at the station by the local head-teacher, Annie (Sheridan Smith), and her mother, Bobbie (Jenny Agutter), where they are marched to the local hall. Lily, Pattie and Ted end up staying with Bobbie, Annie and her son Thomas (Austin Haynes), as none of the villagers are willing to take in three children.

Lily is quite strong-headed, rebellious and free-spirited and quickly takes to roaming the countryside with Thomas and her two siblings. It is on one of these outings that they find a young, black, American soldier hiding in a train carriage. Abe (KJ Aikens) is badly injured and manages to convince Lily to help him by bringing necessary medical treatment. The children think it is a bit of a game, conspiring to hide Abe, not realising that he is in fact a deserter from the Army. Abe has fled the Army after being beaten by the American Military Police for fraternising with the local townspeople. When Lily discovers the truth, she is angry at first but then decides to help Abe get home to America. Unfortunately, their plans go awry when they are spotted by the local town gossip.

War; Racism; Separation from parents; Death of a parent.

The Railway Children Return is a family drama set against the backdrop of World War II. The film raises some important subjects, such as racism and displacement by war, and, as such, is a good basis for parents to discuss these matters with their children. There is violence in this movie, which is done in a way that it is not too graphic but relevant to the story. Nevertheless, due to the subject matter involved, this film is not suitable for children under 8 and parental guidance is recommended for children aged 8-10.

The main messages from this movie are that the world is not a bad place, it just goes through bad times; and that the colour of your skin should make no difference to how you are treated.