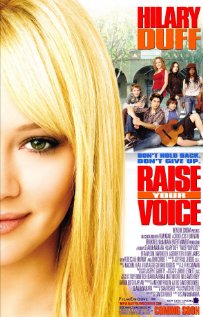 Terri Fletcher is 16 years old and longs to be a singer but her over-protective father Simon forbids her attending summer school in Los Angeles. Older brother Paul dotes on his sister and believes she is very talented and so submits a DVD of her singing to Bristol Hill Conservatorium, one of the most prestigious music schools in the country. When Paul argues with his father trying to persuade him to allow Terri to go, he gets grounded. However Terri has bought tickets for them both to a rock concert that night and so decide to sneak out of the house, breaking their father’s rules. On the way home a drunk driver runs a red light and ploughs into their car killing Paul and leaving Terri hospitalised. This of course devastates the family. As it happens Paul’s video of Terri gains her entrance into Bristol Hill but Terri no longer wants to go. Terri’s mother believes her daughter should go and so devises a plan with Aunt Nina to deceive Simon and get her into music school.

Terri has difficulty fitting into the school, as most of the students are only there to concentrate on their music and on winning the final prize of an academic scholarship worth $10,000. Terri manages to befriend Jay an English boy who’s attracted to her and they team up to write and compose. Things get a bit complicated on more than one occasion when Simon decides to see how Terri’s getting on but Nina manages to handle the situations quite well until Terri’s cover is finally blown. Simon is naturally very angry to learn he’s been so deceived and drives to LA to bring his daughter home on the night of the final concert. Terri decides to follow her brother’s advice and confronts her Father.

The only violence in this movie is when Terri and Jay have a fight which ends in Terri pushing Jay over.

There is some material that would scare children in this age group:

Children over the age of eight and into their teens could still be disturbed by the above mentioned scenes.

The ‘Pepsi’ product was displayed or used in this movie.

There is one sexual reference early in the movie when a boy at school obviously likes Terri and her friend talks about him getting her pregnant.

There is no nudity, but a very passionate kissing scene between two of the music students.

There is some drinking of alcohol:

There is a little coarse language:

The take home message is that it’s okay to disobey your parents if their wishes oppose your own.

Values parents may wish to encourage include persistence in the face of adversity.

The following content could be used by parents to discuss with their children what their own family’s values are, and what the real life consequences can be of disobeying, deceiving and lying to your parents. Parents could also discuss when and how it might be okay to stand up to their parents.