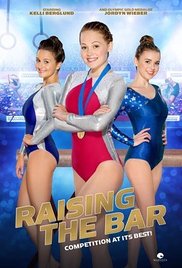 Parental guidance recommended under 9, due to themes, scenes of bullying, and the need to read some content.

When sixteen-year-old Kelly (Kelli Berglund) and her mother (Peta Shannon) move from America to Adelaide, Australia, Kelly decides that it’s time to leave the world of elite gymnastics and competition behind her. However, when she starts at a brand-new school, her quirky new friend Nicola (Lilli Karamalikis) needs help getting into the school gymnastics club and Kelly reluctantly agrees to coach her. When the elite team see Kelly in action they realise they might need her to win the upcoming interstate competition.

There is no physical violence in this movie, but some incidents of bullying behaviour including:

Children of this age may also find above-mentioned scenes disturbing.

There are mild romantic references in this movie, including:

There is some mild derogatory language in this movie, including:

Raising the Bar is a film about navigating the world of teenage friendships and family relationships within the context of a highly competitive sport. It will especially appeal to families who are involved in gymnastics. Parental guidance is recommended under 9 due to the theme of parent separation, scenes of bullying and the need to be able to read text messages and Facebook posts shown on the screen in order to understand the plot.

This movie could also give parents the opportunity to discuss bullying and peer pressure with their children.