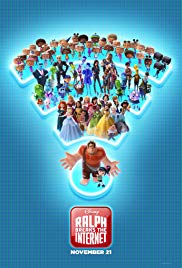 Not recommended under 8, Parental Guidance to 10 (Scary scenes, violence and product placement).

Ralph Breaks the Internet is a sequel to the 2012 film Wreck-It Ralph. In this film, arcade game characters Wreck-It Ralph (Voice of John C. Reilly) and Vanellope (Voice of Sarah Silverman) are good friends who like to hang out after ‘work’ when their video arcade has closed for the day. Although Ralph is content, Vanellope is starting to get a bit bored with the same old thing day after day and is craving some adventure. One day, Ralph decides to help his friend by carving a new track in her video game ‘Sugar Rush’. Although Vanellope loves it, the new track causes the game to malfunction and the steering wheel comes loose. Sadly, this arcade game is so old now that spare parts are impossible to find, and the sugar rush game is destined for the scrap heap. When someone in the arcade finds an eBay listing of the steering wheel, Ralph decided that he and Vanellope must enter the world of ‘the Internet’, in order to find eBay and win the wheel.  This begins a wild adventure where Ralph and Vanellope are thrust into the confusing and endless world of the internet. Here they must navigate social media, cyber bullies, pop-up click bait and internet gaming, finding their way back to their arcade with steering wheel.

There is frequent, extensive and blatant product placement in this movie. Brands shown include:

Ralph Breaks the Internet is a fun and fast paced animated movie. The two central characters of Ralph and Vanellope are quirky, caring, and lovable; showing us what a good friendship should be. Parents should be aware that sometimes this film feels a bit like its main purpose is to introduce and familiarise your children to all the major online companies and brands, with blatant product placement throughout. Although it is likely to be enjoyed by most children, there are some scenes that children under 8 may find a little scary.

The main message from this movie is that friends don’t have to have the same dreams and aspirations and a strong friendship can withstand differences.