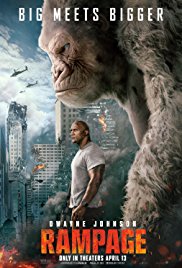 Not recommended under 13, parental guidance recommended 13 to15, due to violent and scary scenes

The film’s opening scene depicts a space station littered with floating dead bodies. We learn that the scientists aboard the space station were conducting genetic editing experiments on animals and that a rat mutated into a monster that has killed all but one of the scientists. The surviving scientist manages to escape the space station before it self-destructs, but on re-entry the escape pod is destroyed and three gene-editing canisters fall to earth. One lands in a wildlife centre in California, affecting a gorilla named George, one in Wyoming affecting a wolf and one in Florida affecting a crocodile.

Davis Okeye (Dwayne Johnson) is a primatologist who has cared for George since he was rescued as an infant from poachers who slaughtered George’s parents. Davis is able to communicate with George via sign language and when Davis arrives at the wildlife centre the following day he immediately notices that something is terribly wrong with George. George has grown considerably bigger overnight and is far more aggressive.

It is at this point that Dr Kate Cadwell (Naomie Harris) arrives at the animal centre, announcing that she knows what is wrong with George and how to cure him. Kate formally worked for Claire and Brett Wyden (Marlin Akerman and Jake Lacy) the owners of the corporation funding the genetic editing experiments in space. Kate explains to Davis what is happening to George and that the Waydens have a cure at their lab in Chicago.

The remainder of the film features Davis’s race to get to Chicago, as George and the other two monsters rampage out of control.

The film contains extended sequences of intense violence, including destruction of property, gun related violence, the graphic depiction of violent deaths including blood and gore, injury and death to animals, and rampaging monsters. Examples include:

Rampage is an action adventure based on a 1980’s video game and is targeted at older adolescents and adult fans of the game. The giant rampaging creatures and many violent scenes including graphic blood and gore are likely to terrify younger viewers so it is not recommended for children under 13 and parental guidance is recommended for the 13 to 15 age group.

The main message from this movie is that people will often do and say anything to get what they want.

Parents may wish to discuss some of the ethical issues surrounding the use of genetic engineering. Can the risks be justified if there is a possibility of curing cancer?