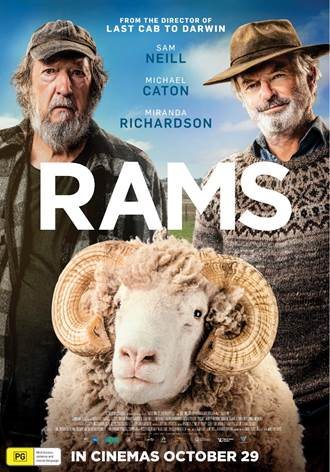 Not suitable under 9; parental guidance to 11 (heavy adult themes, distressing scenes, some violence, coarse language, and problematic alcohol use)

In the remote Western Australian community of Mount Barker, two brothers, Colin (Sam Neill) and Les (Michael Caton), live and raise sheep alongside each other, but due to family feuds they have not spoken to each other in decades. Their lives are turned upside down when Les' award-winning ram is diagnosed with a rare and lethal disease, and the entire community is ordered to destroy their flocks. The brothers have very different ways of dealing with this threat to their very existence. Will they be able to eventually overcome their differences and assert the survival of their prized family bloodline?

Rams is an Australian re-interpretation of the Icelandic drama film Rams (2015) by Grímur Hákonarson. Directed by Jeremy Sims and starring Australian icons, Sam Neill and Michael Caton, this family/community comedy drama gives a touching insight into the lives of two estranged brothers and the wider farming and Australian country town community. The serious themes, comedic subtleties, and a relatively slow pace will likely appeal most to a mature adult audience. Emotionally distressing themes, use of violence, coarse language, and alcohol make this film unsuitable for an audience under 9 and parental guidance is recommended for children under 12.

The main message from this movie is that pride, defiance and holding a grudge can easily get in the way of your own happiness.