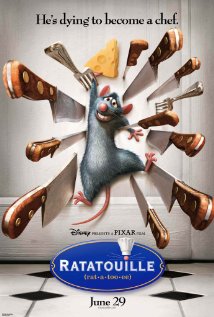 Remy (Patton Oswalt), a rat with an appreciation of food and a talent for cooking, lives with his family in rural farmhouse. While the other rats steal food and garbage to survive, Remy aspires to higher ideals. His hero is the celebrated, and recently deceased, Chef Gusteau. During a forbidden visit to the farmhouse to watch a cooking show, Remy and subsequently all the rats are discovered and come under attack by the lady who owns the home. In the chaos, Remy is separated from his family and drifts aimlessly in the sewers.
Alone and lost, Remy receives support and advice from an imaginary friend in the form of Gusteau(Brad Garrett), who encourages him to  go above ground. To Remy’s delight, he discovers he has in fact drifted into Paris and Gusteau’s restaurant. There he observes the new kitchen hand, Freddo Linguini (Lou Romano), accidentally ruining the soup. Remy steps in to rectify the soup disaster and. Remy’s life is later saved by Linguini.  As a result the pair form a partnership which allows Remy to develop and display his culinary talent and enables Linguini to keep his job, fall in love and gain fame.
With success comes increasing expectations and complications. For Remy, the reunion with his family reminds him of the expectation to conform and behave like a rat, not a human. For Linguini, an unexpected connection with Chef Gusteau places him in charge of the restaurant just when a famed restaurant critic, Anton Ego (Peter O’Toole), announces his intention to review the now thriving restaurant. Under this increasing pressure, the friendship is between Remy and Linguini is challenged but for the sake of the restaurant’s survival, they must work together.

Children in this age group could scared or disturbed the above-mentioned violent scenes.

Ratatouille is a highly entertaining animated comedy about two misfits trying to succeed in the world of Parisian fine dining. The well-depicted characters, slapstick humour and excellent animation should appeal to children and adults alike.
Values in this movie that parents may wish to reinforce with their children include:

This movie could also give parents the opportunity to discuss with their children the real-life consequences of: