Raya and the Last Dragon 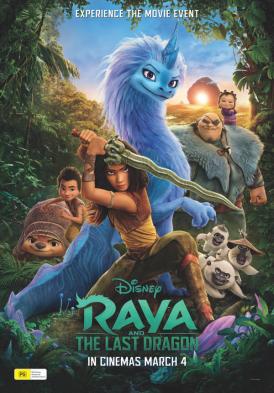 Not suitable under 8; parental guidance to 10 (violence, themes, scary scenes)

Once there was a land called Kumandra where people lived happily, guarded by magical dragons who brought water, prosperity and peace. That is until a plague of evil creatures called Druuns arrived, bringing with them nothing but death and destruction, turning all life to ash and stone. As the last dragons made a valiant stance to save what remained of humanity, their combined power wiped out the Druuns, but when the smoke cleared, all the dragons were gone and nothing was left save a magical gem and the legend of a lone dragon. In fear, the people split up the land, drawing borders and boundaries. As the years passed, mistrust and animosity grew and the gem had to be hidden away. After the passing of centuries, a kind-hearted King dreams of reuniting the lands and invites all the nations to reconcile and form Kumandra again. His young daughter, Raya, trained as a warrior princess, strikes up a friendship with a girl named Namaari from another kingdom but her trust is soon betrayed. She watches in horror as her beloved father is shot and the gem she has sworn to protect is broken into pieces which releases the evil Druuns once again. As each nation takes a piece of the gem and flees, Raya’s father entrusts his daughter with their piece, entreats her to unite the kingdoms and flings her into the river just as he himself is turned to stone. Raya spends the next six years searching for the legendary lone dragon and is, at last, able to locate and reanimate the infamous Sisu who has been sleeping for centuries. Together they set off to find the other pieces of the gem, vanquish the Druun and save all those who’ve been turned to stone.

Raya and the Last Dragon is an animated, Disney, adventure and an epic tale of good versus evil. The graphics are excellent, the plot is fast paced and even though the story is full of darkness, it is interwoven with such hope and humour that despair never gets a chance to take hold. Somehow all things seem possible. That being said, due to violence, themes and scary scenes, the film will be best enjoyed by older children and adults.

The main messages from this movie are that as much as humanity is capable of great evil, it is also capable of great good. If we can overcome prejudice and misunderstanding to come together as one family then we have a greater power than any dragon ever did. We have the power to conquer fear and hate and to change all our darkness into light.