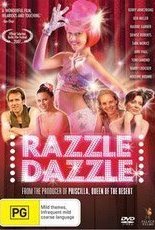 In Australia, thousands of children participate each year in the Sanosafe Dance Troupe Spectacular. It is a highly competitive world, full of eccentric characters, pushy parents and young stars in the making.
For the last few years, the competition has been won by Miss Elizabeth’s (Jane Hall) dance school troupe. Miss Elizabeth has high expectations of her students and her teaching style is one steeped in discipline, sparse praise and, at times, humiliation of her students. She has a low opinion of her competitors, particularly Jonathan Scott (Ben Miller).
Mr Jonathan, formerly a moderately successful UK based dancer, runs his Jazzketeers with different aspirations. Mr Jonathan tends to choreograph dances with political messages, which are less acceptable to audiences and judges alike and consequently his dance school has achieved less success in the competition. Nonetheless, Mr Jonathan has a loyal support base, including his school’s business manager Barbara(Denise Roberts), Justine(Kerry Armstrong), the pushy mother of  his student Tenille(Shayni Notelovitz), and his costume maker (Tara Morice).
Both Miss Elizabeth and Mr Jonathan enter their dance troupes into the competition and must cope with many obstacles and adversities along the way.

There is nothing in this film which is likely to disturb children in this age group.

There is nothing in this film which is likely to disturb children in this age group.

There is no coarse language used, however there is some name calling by the adult characters.

Razzle Dazzle is a feel good mockumentary about the world of children’s dance competitions. Younger children may not follow the comedic tone of the movie, but may enjoy the colourful costumes and performances by the dancing troupes. Older children and adults are likely to recognise and enjoy the eccentric characters inhabiting this dance world, with some laugh out loud moments. (Tip: be sure to stay right to the end of the credits).