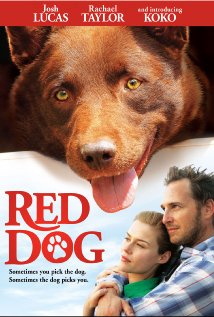 Not recommended under 8, PG to 13 (Violence; Disturbing scenes)

The film is based on a book by Louis Bernieres that was inspired by the story of a stray kelpie in the 1970′s.  Red Dog became an adored member of the small mining community of Dampier, Western Australia, where there is a bronze statue erected in his honour.

The story begins when a truck driver and stranger to the town (Luke Ford) arrives at the pub in Dampier to find everyone engaged with a dying kelpie, Red Dog (played by a two-year old dog called Koko). The film progresses as a series of flashbacks when locals such as Vanno (Arthur Angel) and Joko (Rohan Nichol) tell stories about how the dog has changed their lives.

Red Dog was originally found and brought to town by publican Jack (Noah Taylor) and his wife Maureen (Loene Carmen). He formed an inseparable relationship with an itinerant American bus-driver named John (Josh Lucas) and we follow the story of John’s developing relationship with Nancy (Rachael Taylor). What happened next sent Red Dog off on his legendary travels.

Loss of a loved one; animal distress

OK for this age group.

Red Dog is an enjoyable Australian film based on a true story and featuring some classic characters and popular actors. Younger children may find some scenes disturbing, but it is a good family film for those with children over 10.

The main messages from this movie are about the loyalty of dogs and the importance of animals to people.