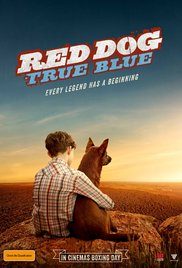 Not recommended under 9, parental guidance 9 to 13 due to disturbing themes and scenes.

This prequel to Red Dog opens with Michael Carter (Jason Isaacs) taking his two young sons to the cinema to see the original film. When Michael’s young son Theo asks his dad why the film made him cry, Michael tells his son that he was the original owner of Red Dog when he was a young boy. From this point on the story is told as a flashback, beginning in 1969 where we find Michael Carter as a young boy known as Mick (Levi Miller).

Mick’s life is turned upside down when his father dies and his mother has a nervous breakdown, leaving no one to care for him.  As a result Mick is shipped off to an outback cattle station owned by his strict but sensitive grandfather (Brian Brown). Mick easily slips into his new life and is well-liked by the station’s colourful characters. But Mick’s greatest companion and teacher comes along in the form of a mud-covered kelpie pup stranded up tree after a cyclone. Mick rescues the pup and calls him Blue and the pair become fast friends.

A year later the pair are inseparable with Mick and Blue happily roaming the countryside. All that changes when Mick’s grandfather decides that Mick’s education is lacking and brings in a young and attractive tutor named Betty (Hanna Mangan Lawrence) to assist with Mick’s studies. Mick is instantly smitten with Betty but finds that he is not the only one vying for her attention - a situation that leads to him making some bad choices which he has to right.

Unfortunately all good stories come to an end and Mick, like all station-dwelling kids, is sent off to boarding school. With Mick gone, Blue refuses to stick around and begins his roving adventures as ‘Red Dog’.

The film contains some violence, including:

The film contains occasional low-level sexual innuendo and references scattered throughout. Examples include:

The film contains some occasional use and depiction of alcohol. Examples include:

The film contains a scattering of low-level coarse language and name-calling. Examples include:

The film Red Dog: True Blue (the prequel to Red Dog) is a comedy drama about the friendship between a boy and his dog. True Blue connects well with its predecessor while still providing the audience with a completely new story full of humour, sadness and compassion. It is an entertaining film for most of the family, although there are themes and scenes that are likely to disturb younger children.  It is therefore not recommended for children under 9, with parental guidance recommended for 9 to 13 year olds.

Parents may wish to discuss the manner in which the film tackles the issue of land rights as well as sacred sites and artefacts.