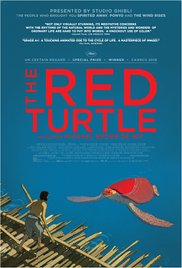 Not recommended under 8, parental guidance recommended 8 to 10 due to themes and scenes that might disturb young children.

The Red Turtle is an animated French/Japanese film containing no dialogue. The movie tells the story of a shipwrecked sailor who is washed up on a lonely tropical island. Although seemingly devoid of humans, the island contains a variety of animals such as turtles, birds and crabs. Hoping to escape, the man uses materials from the island to build himself a raft, but his plan is repeatedly foiled by a giant red turtle. Although initially frustrated, the sailor begins to gradually bond with the creature.

The man also eventually meets a woman, and the two begin a family together. Living on the island, the family go through a series of tribulations which threaten to destroy the life they have built together.

The Red Turtle is a simple but beautiful film that subtly encourages viewers to identify with the nameless shipwrecked man. Having no dialogue, the film appears to avoid imposing specific meaning, but invites audiences to watch the story unfold and come to their own conclusions. However, the messages of the film seem to be that material possessions are not necessary for living a fulfilled life and that although a person’s life may have taken a different direction from what they initially anticipated or desired, there can still be incredible value if we accept change and uncertainty. There is plenty here for parents to discuss with children.

Because of the film’s themes, and scenes that might disturb younger children, it is not recommended for children under 8 and best suited to viewers over ten. Parental guidance is recommended for the 8 to 10 age group.