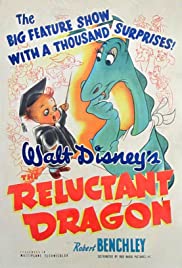 Parental guidance under 6 (substance use)

California, 1941, Robert Benchley (as himself; note: Robert Benchley was a well-known American humourist at the time) finally gives in to his wife's nagging to pitch a movie idea to Walt Disney: the children's story of The Reluctant Dragon. While she is convinced that it is a great story and opportunity, Benchley is worried he will make a fool of himself. At the Walt Disney Studios, on the way to his meeting with Walt, Benchley meets studio artist Doris (Francis Gifford) who takes him on a fascinating tour of the Walt Disney Studios. Benchley visits a drawing class where students learn the art of animation; he witnesses a film score and voice recording scene, where he meets Clarence Nash – who gave Donald Duck his voice; joins a sound effect session; and learns how thousands of hand-drawn and coloured images are created, put together, and turned into an animated film. When Benchley finally meets Walt Disney (as himself) and is about to propose his pitch, he is invited to watch a short film that has just been finalised – only to realise that someone else had the same idea because what he sees turns out to be the story of The Reluctant Dragon.

Glimpse behind the scenes; understanding how things are made; old-school animation; Disney characters.

The Reluctant Dragon is an impressive testimony of the early days of animated films and Walt Disney's pioneering work which formed the foundation of all modern animation. Children and adults alike are likely to be impressed seeing the incredible amount of work and attention to detail it took to produce an animated film long before the invention of computers. Viewers get an educational as well as entertaining insight into the different steps involved, from sketching a storyline, hand-drawing and colouring each single frame, to the creation of sound effects, voice-overs, and soundtracks. The animated sections, in particular the titular "The Reluctant Dragon", are adorable and funny. Parents may want to give some historical and cultural context, highlighting that this film was made nearly 80 years ago.

The main messages from this movie are that it is worth looking behind the scenes in order to understand and appreciate the incredible effort taken. The featured animated short film "The Reluctant Dragon" has its own message which is that one should not judge a book by its cover – in this case for example assuming that a dragon is a vicious, violent, destructive beast because this particular specimen turns out to be a shy, gentle, and poetry-loving creature.