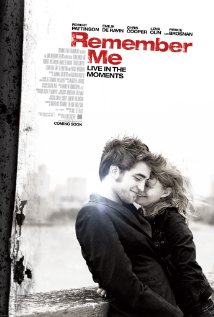 On a New York subway station in 1991, eleven year old Allissa Craig (Caitlin Rudd) witnesses her mother shot down dead in front of her by two muggers. Ten years later, Ally (Emilie de Ravin) lives with her over protective father, Neil, (Chris Cooper) a New York police sergeant and both bear the scars of the traumatic events of the past.

Ally is a student in a class with Tyler Hawkins (Robert Pattinson) who is also a victim of tragic circumstances. Tyler’s older brother committed suicide on his 22nd birthday, following the break up of his family. His mother has a new partner and his father, Charles Hawkins (Pierce Brosnan), a successful lawyer, has disconnected from the family. Tyler, who shares a flat with roommate Aidan (Tate Ellington), loves and takes care of his younger sister Caroline (Ruby Jerins), Caroline is a very gifted artist, but has poor social skills, which makes her a victim of bullying.

One evening Tyler and Aidan get involved in a street fight and Tyler is arrested by Neil who beats him quite badly. In an effort to get even, Aidan dares Tyler to take Ally out on a date. Things don’t go according to plan however, as Tyler is not a vengeful person and actually falls in love with Ally. Tyler and Ally find that they are able to understand each other and help each other to heal. While their relationship grows, Ally’s relationship with her father deteriorates and Ally moves in with Tyler.

Things fall apart when Tyler admits to Neil how it all began, and then confesses the dare to Ally. Meanwhile Tyler is trying to repair relationships with his own father and is on the verge of doing so when again, tragic events lead to an unexpected ending.

There is some partial nudity and a couple of passionate sex scenes.

Remember Me is a gritty romantic drama which involves stories on various levels. The characters are quite complex, well developed and well portrayed. Due to the content of the movie, it is more suited to an adult audience, despite the presence of teenage drawcard Robert Pattinson.

The main messages from this movie are the ability of the human spirit to overcome tragedy and the importance of treasuring every day of one’s life.