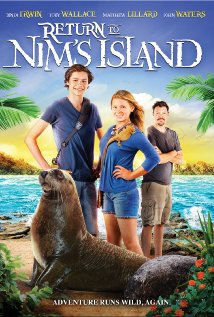 Not recommended under 7, PG to 9 (Violence; Disturbing scenes)

Return to Nim’s Island opens with 14-year-old Nim (Bindi Irwin) swimming amongst colourful coral with her best friend Selkie the sealion, while collecting protozoa samples for her scientist father Jack (Matthew Lillard).  The only other human inhabitant of Nim’s Island is Jack’s research assistant Felix (Nathan Derrick). We soon learn that the island is under threat from developers who want to buy the island and build a resort there. Jack, intent on stopping the sale, heads off to mainland Australia to meet with the Minister of the Environment. Nim convinces Jack to leave her on the island with Felix. She intends to prove the existence on the island of three endangered animal species, which would ensure the island's protection from developers.

Meanwhile 14-year-old Edmund (Toby Wallace), who lives on the mainland, has been planning his own adventure for a number of years, saving his money and buying camping equipment so that he can run away to Nim’s Island. To get to the island, he hires the services of a disreputable charter boat captain named Booker (John Waters) and his two sons (Sebastian Gregory and Jack Pearson). Unfortunately what Edmund doesn’t know is that the unscrupulous Booker and sons intend to poach the island’s native and endangered animals.

Edmund and Nim get off to a shaky start at first meeting but when Edmund proves his usefulness, Nim begins to warm to him. However when Booker and sons begin to poach the island’s animals, events take a nasty turn for Nim, Edmund and Felix.

The film contains infrequent violence which at times is slapstick and comical. Examples include:

There are some name calling and putdowns that children may imitate. Examples include:

Return to Nim’s Island , sequel to Nim’s Island,  is a family film that contains lots of positive messages relating to the importance of saving the environment and endangered animals. The film is likely to entertain older children and young teens with its balance of comedy, adventure, suspense and a hint of romance with attractive teenage stars. Despite the G rating, the Classification Board warns of “very mild violence” and our reviewer does not recommend the film for children under seven.   There are some violent scenes, and scenes of people and animals in danger, which are likely to scare children under 7 and some slightly older than this, so parental guidance is recommended for children up to nine years old.

Values in this movie that parents may wish to reinforce with their children include selflessness, problem solving, courage and perseverance as shown by Nim, a strong female role model.  However, parents may also wish to discuss the possible real-life consequences of putting your life in danger by pitting yourself against hardened criminals in the way Nim did.