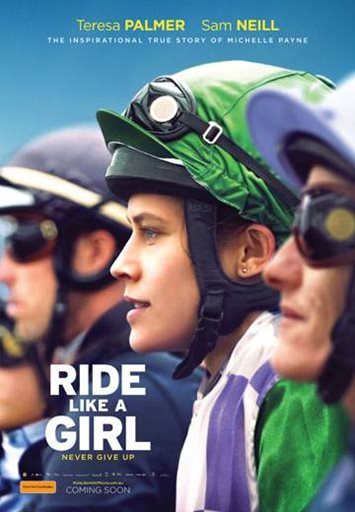 Not suitable under 10, Parental guidance to 13 (Coarse language, Adult themes)

Ride Like a Girl is the true story of Michelle Payne (Teresa Palmer) and her tumultuous journey from childhood on a farm near Ballarat, Victoria, to being the first female jockey to win the Melbourne Cup – horse racing’s toughest two-mile race. The youngest of 10 children, Michelle is raised by her father Paddy (Sam Neill) who lost his wife in a car accident when Michelle was six months old. Michelle follows in her siblings’ footsteps and leaves school at 15 to become a jockey. Pursuing her dream to the ‘big smoke’, Michelle faces the harsh reality of sexism in the sport of horse-racing and struggles to find a horse owner to take a chance on her. After early failures she manages to find her feet with the support of her brother, Stevie Payne (played by himself) who has down syndrome. A family tragedy and her own near fatal horse fall makes Michelle reconsider her dreams and face the decision on whether to give up horse racing. However, against all medical advice and protests from her siblings but with the support and love of her dad and brother Stevie, Michelle meets the Prince of Penzance and gets back on a horse again. Overcoming impossible odds and a suspension for careless riding, Michelle is given an opportunity to ride in the 2015 Melbourne Cup. With the chances of 100 to 1, alongside her brother and strapper Stevie, Michelle defies the odds and makes history as a trailblazer for women in sport.

Directed by Rachel Griffiths, Ride Like a Girl is a heart-warming movie that encapsulates the phrase, “if you fall off, get back on the horse”. Stevie Payne who has down syndrome and plays himself in the movie is a standout, his comedic moments, hard work, and compassion shine in the movie. Importantly, the movie does not shy away from the controversies and allows the audience to uncover the dangerous side of horse racing. Suitable for a family with older children/teens.

The main messages from this movie are that women can do or be anything if they never give up, and the importance of family.