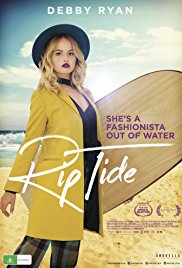 Not recommended under 7 due to lack of interest, OK for children aged 7 and up, although parents may wish to discuss some of the themes with younger viewers

Cora (Debbie Ryan) is an American teenager living in New York. Her mother (Danielle Carter) is the head of a top New York modelling agency and Cora is on track to a lucrative editorial modelling contract. One day, during a shoot, Cora becomes frustrated and overwhelmed by the stifling environment and the lack of connection with her busy mother. As she rushes out in an emotional state, someone takes a video of her as she tumbles down the stairs. The video goes viral on social media and Cora is an outcast, and on the verge of ruining her modelling career.

Needing to escape all the attention, Cora decides to take a flight to Australia to stay with her Aunt Margot (Genevieve Hegney) in a sleepy little surf town on the coast of Australia. Aunt Margot is an ex pro-surfer who is still recovering from the loss of her husband a year earlier. Cora takes some time to adjust to the rhythm of life in Australia but gradually she reconnects with nature and with her own buried aspirations, working out what she really wants from life.

Career choices and aspirations; mother-daughter relationships and tensions; grief at the loss of a partner; online bullying

There is some mild semi-nudity and romantic activity in this movie, including:

Rip Tide is a movie aimed towards pre-teen and early teenage viewers. It has some lovely cinematography of the Australian coast line, some good female role models and positive messages for young people. It lacks interest for children under 6 and parents may wish to discuss some of the themes with the 7 to 11 group.

The main message from this movie is to follow your aspirations, even when your parents have different ideas about what is best for you.

This movie raises a number of other issues that parents may wish to discuss, including.