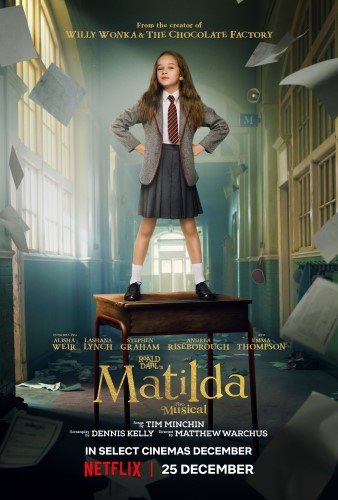 Not suitable under 6; not recommended under 8; parental guidance to 9 (scary scenes and themes)

Matilda (Alisha Weir) came into the world as an unwanted child to her selfish and mean parents. She is a child with extraordinary abilities who loves to read books, much to the annoyance of her parents, who would prefer her to watch trashy TV shows. Matilda has a friend in the local librarian, Mrs Phelps (Sindhu Vee), to whom she tells her wildly imaginative stories. One day, Matilda and her parents are visited by the local authority and teacher, Miss Honey (Lashana Lynch), with whom Matilda forms an instant bond. They decide that Matilda needs to attend school.

Matilda is excited about starting school at Crunchen Hall but is shocked to find that it is run by the most fearsome head teacher, Miss Trunchbull (Emma Thompson). The students all live in fear of her and her extreme forms of punishments. One of which is isolation in the Chokey – a wooden contraption out in the woods and enclosed by chains. Matilda’s high intelligence makes her question what is happening at the school and dares to stand up to Miss Trunchbull. Matilda becomes even bolder when she realises she has the power to move objects with her eyes. Matilda becomes an inspiration to the other students who eventually all revolt against the authoritarian and extremely nasty, Trunchbull.

Roald Dahl’s Matilda the Musical is a cinematic version of the recent musical stage play, featuring the music of Tim Minchin. The cast of actors are wonderful, including Emma Thompson as the most fearsome Miss Trunchbull. The core of the story is a dark tale of child abuse, neglect and cruelty. However, the triumph of the human spirit comes through Matilda, who overcomes and defeats all of her powerful enemies through strong willpower, intelligence and extra sensory powers. The movie is best suited for children aged 10+ due to the themes, violence and scary scenes. For these reasons it isn’t suitable for children under 6, it isn’t recommended for under 8’s and parental guidance is recommended for 8–9 year olds.

The main messages from this movie are that sometimes you have to disobey those in authority when you know they are wrong; and that you have determination over your own story.