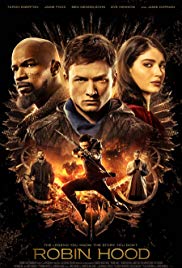 Not recommended under 13, parental guidance recommended 13 to 15 due to violence, and disturbing scenes and themes

When wealthy aristocrat, Robin of Loxley (Taron Egerton) is sent to join the crusades, he is forced to trade his riches and comfort, and his love, Marion (Eve Hewson), for death and violence in far-off lands.  During a mission Robin defies his commander by setting free an enslaved Moor whose son had been beheaded in front of him.  As punishment, his commander wounds Robin with an arrow, before sending him home to England.

Arriving home, Robin finds that his town is now in ruins under the tyrannical leadership of the Sheriff of Nottingham (Ben Mendelsohn) and that his home has been seized by the Sheriff to pay for war tax. Marion has moved on to a new love, Will (Jamie Dornan). Before Robin can fall into despair, however, John (Jamie Foxx), the man he freed, reveals that he has followed Robin back to England to help him restore order in Nottingham.  The two men train together before setting out on a series of daring adventures, in which they steal from the Sheriff and deliver the spoils to the villagers.

As the Sheriff tries to capture the hooded vigilantes, Robin and Marion uncover a secret plot by religious leaders to ensure that they remain rich and the crusades continue.  Robin and his companions must foil the plot before the villagers and Nottingham are completely wiped out.

There is continual violence in this movie including:

There are a number of scenes in which horses are injured or killed – e.g., a horse falls off a bridge and hits the side of it as it falls, a horse is hit with an arrow, etc.

Robin Hood is a violent remake of the classic story, which appears to be designed to present an amped-up, action-filled version of the well-known tale with modern references.  While some may enjoy the action sequences, the dialogue and plot seem clumsy, and the costuming and set-design are historically inaccurate so that the film lacks coherence.  Due to the continual violence, and disturbing scenes and themes, the film is not recommended for children under 13 and parental guidance is recommended for those under 15.