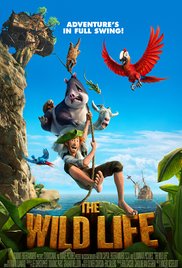 Not recommended under 6; parental guidance recommended 6 to 8 due to violence and scary scenes

Robinson Crusoe (voice of Matthias Schweighöfer) is shipwrecked on a rocky island along with his good friend Aynsley, the dog (voice of Doug Stone). Believing they are the only survivors, Crusoe and Aynsley set out for the shore where a group of terrified creatures watch what they think are sea monsters coming to destroy their beautiful paradise. Mack the parrot (voice of David Howard Thornton) is more adventurous than most and sets out to find out more about these ‘monsters’.

Unfortunately Crusoe and Aynsley weren’t the only survivors to reach the island. Two nasty cats, May (voice of Debi Tinsley) and Mal (voice of Jeff Doucette) also reach the shore. While Crusoe is befriending the group of frightened island animals with the help of Mack, who he renames Tuesday, May and Mal and their litter of kittens set out to destroy all life on the island.

Shipwrecks; survival; animals in peril; death of a pet

There is a lot of violence in this movie, some of it intended to be humerous.

Younger children in this age group could also be disturbed by the above mentioned scenes particularly Aynsley the dog dying.

Robinson Crusoe: The Wild Life is an animated version of this classic tale. In this version, however, Crusoe is shown as inept and unable to survive without the help of his animal friends. Due to frequent violence and some scary scenes, the film is not recommended for children under six and parental guidance is recommended for 6 to 8 year olds. However, there are some good underlying messages that parents could talk about with their children and children are likely to enjoy the animal characters.

The main message from this movie is that a community consists of many different individuals who all depend on each other to survive and must work together.

This movie could also give parents the opportunity to discuss the importance of looking after the environment and the environmental damage that cats actually do to the ecosystem.