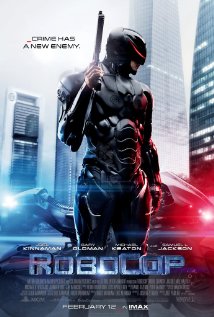 Not suitable under 13, PG to 15 due to violence and disturbing themes and scenes.

Robocop is set in the year 2028 and opens with scenes depicting drones and androids engaged in urban warfare against terrorists in what appears to be a Middle Eastern country. The robots are manufactured by OmniCorp, a billion dollar company run by Raymond Sellars (Michael Keaton). Sellars wants his androids to be deployed throughout the U.S.A to replace American law enforcement officers. However, the American public are sceptical of the use of robots for this purpose and congress has passed a law preventing them being used on American soil. To circumvent current laws, Sellars decides that his company needs to develop an android that is part human and part robot - a ‘robocop’.

Alex Murphy (Joel Kinnaman) is a Detroit undercover detective hot on the trail of corrupt police officers selling high-powered guns to drug dealer Antoine Vallon (Patrick Garrow). Realising that Murphy is getting too close for comfort, Vallon orders the murder of Murphy via a car bomb but the attempt fails, leaving Murphy severely mutilated.

Murphy’s injuries make him the perfect choice for OmniCorp’s experimental machine/human hybrid cop and scientist Dr. Dennett Norton (Gary Oldman) is given the job of transforming Murphy into the world’s first Robocop. However, the transition from man to machine is not a smooth one. Dennett is forced to alter Murphy’s brain, making him more machine than man. But there is more to the human brain than both Sellars and Norton bargain for and when Alex’s old personality overrides his programing, he seeks to right the injustices done to him.

The film contains intense sequences of action violence including gun violence, some scenes of suicide bombers, occasional gruesome images and occasional blood and gore. Examples include:

Children in this age group are also likely to be disturbed by some of the above-mentioned violent and scary scenes.

None of concern in the film, but associated merchandise may appeal to boys in particular.

Reference to a man being a rapist

RoboCop is a remake of the 1987 film of the same name. It is a science fiction action thriller targeting older adolescents and adults. While depicting less blood and gore than the original, it deserves its M rating, featuring numerous gun battles, suicide bombers, gruesome images and a very high body count. Although the film may attract children under 15, it has a number of violent and disturbing scenes and characters which make it unsuitable for under 13s, and parental guidance is strongly recommended for young adolescents.