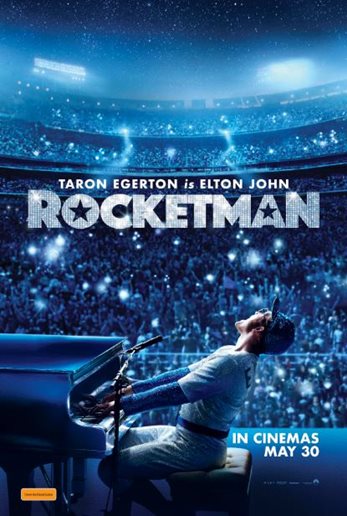 Not suitable under 16, not recommended 16 – 17 due to language, drug use and sex scenes.

Reggie Dwight (Matthew Illesley) was born into a loveless household. The one thing he craved most was his parents’ affection which he never really received. His mother (Bryce Dallas Howard) was self-absorbed while claiming to have his best interests at heart and his father (Steve Mackintosh) was disinterested and unaffectionate. His grandmother (Gemma Jones) was his closest supporter who recognized his musical talent and helped ensure that he got lessons which led to his scholarship at the Royal Academy of Music. But it was Reggie’s (played as an adult by Taron Egerton) innate talent, his ability to see the music that should accompany the lyrics, and his partnership with Bernie (Jamie Bell), a songwriter and his closest friend that got him noticed in the first place. The film follows the early, substance abusive, years of Elton John’s career and his relationship with his dreadful manager John (Richard Madden) who broke his heart and used him, pushing him to the edge on numerous occasions. Elton tells the story of his life to a group in rehab, and through the retelling begins to heal the hurt that he has been holding onto his whole life. He faces the fear that he can never be loved, learns to love himself and eventually finds the love he has been searching for.

It is unlikely that children over the age of thirteen would be frightened by anything in this film.

Elton John songs are featured throughout the film. Tower Records is mentioned by name and The Troubadour club is featured in Los Angeles.

Rocketman is a musical biopic about the early years of Elton John and his rise to stardom. Whilst some aspects of his rise to fame may appear glamorous (e.g., special treatment, private cars, adoring fans), scenes depicting things such as promiscuous sex and drug use appear less attractive and reflect Elton’s desperate need to find real love and happiness through adverse means. Hence, this is not a family film and will best be enjoyed by older, more mature audiences.

The main message from this movie is that real love is hard to come by, so instead of finding a way to live without it you should find a way to love yourself, be true to yourself and live the best life that you possibly can.

Values in this movie that parents could discuss with their older children (16 - 17):

This movie could also give parents the opportunity to discuss with their older children (16 - 17) attitudes and behaviours, and their real-life consequences, such as.