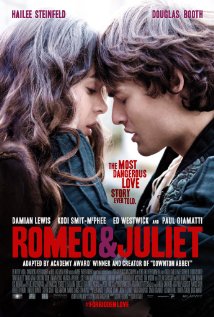 This is the latest film adaptation of Shakespeare’s famous tragic tale of romance between star-crossed lovers. The Montacute and Capulet families are sworn enemies and hate each other with a vengeance. This is very unfortunate for Juliet, a Capulet, (Hailee Steinfield) and Romeo, a Montacute, (Douglas Booth) who fall madly in love and have to keep their love a secret. They marry in secret, with the blessing of Juliet’s nanny (Leslie Manville), but when Romeo kills Tybalt (Ed Westwick) in a sword fight, he is banished and sent into exile.

Lord Capulet (Damien Lewis) is determined that Juliet will marry Count Paris (Tom Wisdom) much to Juliet’s dismay. When she tells her troubles to the Friar who married them (Paul Giametti), he devises a clever plan whereby Juliet will drink poison and appear dead but will only be asleep for several hours. The Friar sends word to Romeo of his plan but the messenger is waylaid and instead Romeo receives the news that Juliet has died. He returns to find her lying on her tomb and decides he will kill himself to join her by drinking poison. Before he dies, however, Juliet awakes and finds him dying. She then kills herself with his sword.

Children in this age group are most likely to be disturbed by the violence described above.

In addition to the above-mentioned violent scenes there are some scenes in this movie that could scare or disturb children aged five to eight, including the following:

Children in this age group are likely to be disturbed by Romeo’s and Juliet’s suicides.

Younger children in this age group may also be disturbed by the suicides of Romeo and Juliet.

Romeo and Juliet is the latest movie version of Shakespeare’s tragedy about the doomed romance of two young people who are dvictims of a family feud. This adaption of the story is filmed in beautiful settings on location in Italy but the Shakespearean language, which is not true to the original, sounds stilted, flat and unnatural, particularly between the two young lovers.  As a result, younger viewers may find it quite tedious. A number of scenes are too violent for young children, and tweens and younger teens may be disturbed by the suicides of Romeo and Juliet.

The main message from this movie is that love can rise above hatred.

Values in this movie that parents may wish to reinforce with their children include the questioning of traditionally held hatred and bigotry.

This movie could also give parents the opportunity to discuss how values have changed since Shakespeare’s time and whether it is possible to fall in love by sight alone, without actually knowing the other person.