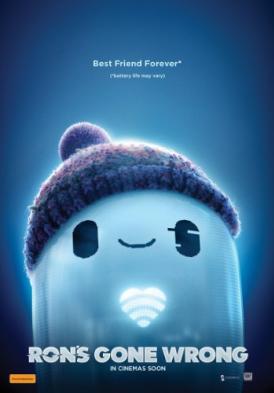 Not suitable under 8; parental guidance to 12 (violence, crude humour, themes)

Have you ever felt lonely? Awkward? Misunderstood? Well Marc (voice of Justice Smith), creator of the B-bots, certainly has. As a child Marc found it exceedingly difficult to form friendships, so, as an adult he created an algorithm designed to help kids find others with similar interests, and learn to develop friendships through the use of his little robots. An interesting combination between an iPhone, pet and a best friend, the B-bots are eagerly anticipated by people everywhere and they take the world by storm. Soon everyone seems to have B-bots, everyone that is except Barney (voice of Jack Dylan Grazer), a young boy who lives with his father and Russian grandmother (voice of Olivia Coleman) in a small house on the outskirts of town. Without the funds to buy much of anything, Barney makes do with his scooter and tries to be as invisible as possible at school. When Rich (voice of Ricardo Hurtado) begins to bully Barney for not having a B-bot and for the fact that Barney likes geology, his father and grandmother set out to find him one. Unable to even gain access to the store, they discover a man in a loading bay who sells them a damaged B-bot whose program isn’t uploaded, whose system is incomplete, and who doesn’t act the way it is supposed to. They have a troublesome start to their relationship, with B-bot, ‘Ron’ (voice of Zach Galifianakis), embarrassing Barney in front of Savannah (voice of Kylie Cantrall), a popular girl who used to be his friend. When Ron sticks up for Barney and puts Rich and the bullies in their place a true friendship between the pair begins to blossom. When Rich discovers why Ron acts so differently he removes the security settings on his own B-bot and starts a chain reaction that creates havoc throughout the school. Marc is eager to meet Ron and learn how his programming is different from the rest but his manager, Andrew (voice of Rob Delaney), is only concerned with sales ratings, data harvesting and taking the product as far as it will go. Andrew will do anything he can to sabotage Ron, while Barney will do whatever it takes to keep his friend safe. Barney helps Marc discover what was missing from his original algorithm and, together with his father, grandmother and Ron, they set off to stop Andrew and to reverse the damage the B-bots have inadvertently done.

Addiction to technology, social media and social status within a community; Corporate corruption; Death of a parent; Bullying; Peer pressure; Reliance on technology.

Ron’s Gone Wrong is an animated adventure about friendship and connection, and the pros and cons of technology. The film features a fast paced plot, excellent voice acting and a powerful message. While not suitable for very young children Ron’s Gone Wrong is a good choice for a family film as it has something for both adults and older kids as well.

The main messages from this movie are that true friendship is a two-way street, that technology is powerful but imperfect and that life is not about the number of likes you get or the number of subscribers you have but rather about the friends you find and the hearts you connect with along the way.