Royal Night Out, A 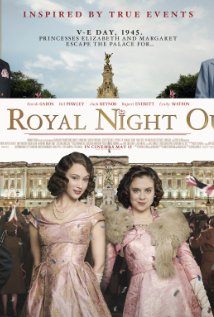 Not recommended under 14; parental guidance recommended 14-15 due to disturbing scenes, sexual references and activity, and substance use.

On the 8th of May 1945 the end of World War II is declared and all of London is out on the streets to celebrate. A Royal Night Out is a fictionalised account of what happens when Princesses Elizabeth (Sarah Gadon) and Margaret (Bell Powley) leave the palace to join the party despite the concerns of their parents the Queen and King (Emily Watson and Rupert Everett).

There are also some scenes which show people gambling.

A Royal Night Out is a comedy drama which gives an interesting look at what London was like on the night World War II ended and an imagined version of what might have happened to the two British Princesses that night. It is likely to be enjoyed by adults and older teens who enjoy historical fiction. Because of the sexual references, disturbing scenes and substance use, this film is not recommended for children under 14, with parental guidance recommended for slightly older teens.