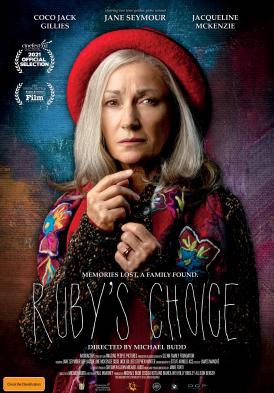 Not suitable under 13; parental guidance to 15 (themes, lack of interest for younger viewers)

Tash (Coco Jack Gillies) is a teenager who lives with her parents, Sharon (Jacqueline McKenzie) and Doug (Stephen Hunter). Life is not all good at home as her parents struggle to make ends meet but things take a turn for the worse when her grandmother, Ruby (Jane Seymour), comes to live with them. Ruby has dementia and is becoming increasingly confused and frightened. To complicate matters more, Tash’s obnoxious cousin Ned and his Dad move in, as Ned’s parents are going through a divorce. Much to her annoyance, Tash has to share her bedroom with her grandma to make room for the burgeoning family.

Tash goes from resenting her grandmother to becoming very close to her, discovering things about her past that even her mother didn’t know. Eventually the time comes for Ruby to move into a nursing home, and she wants to be the one to make the choice as to where she goes.

Ruby’s Choice is a drama about the complexities of family life, ranging from teenage problems to getting old and suffering from dementia. The film depicts the problems most families have to encounter, such as financial problems and the inability of some marriages to last. It is rather sad in many aspects but does show that families are there for each other, through thick and thin. Due to its content, Ruby’s Choice is mainly aimed at older teens and adults and is therefore not recommended for under 13’s.

The main messages from this movie are that families support each other, and that love can triumph over most disasters.