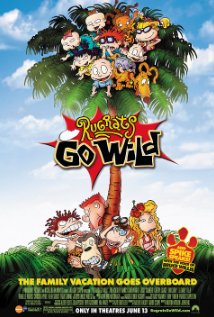 The Rugrats and their families are going on a boating holiday when they get caught in a freak storm. A huge tidal wave flips their boat over and sends it to the bottom of the ocean. The boat resurfaces upside down and in true Poseidon Adventure style the passengers make their way to the top of the ship (actually the bottom) and manage to punch a hole in the hull through which they escape. They drift for a while in a life raft until they reach a desert island.

While the parents practise their survival skills, the Rugrats wander off into the unknown and discover that the Thornberrys are also there on an explorative mission. Angelica decides to explore on her own and discovers Debbie Thornberry lounging next to their luxury touring van. The two of them set out in the van to look for the rest of the Rugrats with disastrous results. Meanwhile Nigel Thornberry falls off a cliff to the ground and a coconut lands on his head rendering him unconscious. He awakes with amnesia and thinks he’s three years old. He joins the rest of the Rugrats who unwittingly follow his lead thinking he knows where he’s going. Angelica comes to the rescue in the Thornberry’s underwater vehicle. However the vehicle is running out of petrol and close to running out of oxygen. It takes Pickle’s Dad’s scientific brain to devise a method of rescuing all of the children and Nigel Thornberry.

There is a little violence in this movie, mostly set in a comic context, including the following:

There is some material in this movie that could scare children in this age group; however it is mostly quite brief and not sustained. It includes the following scenes:

Children over the age of eight would be able to understand that the danger is not realistic.

There is no coarse language but there is some ‘toilet humour’ including the following:

Rugrats go Wild is a fairly light entertaining movie for young children and as such doesn’t really have a take home message.