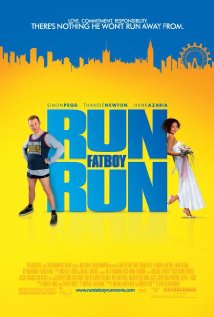 Not recommended under 13, parental guidance to 15 due to sexual references, coarse language and smoking.

Dennis (Simon Pegg) suffers pre-wedding jitters and leaves his heavily pregnant fiancee Libby (Thandie Newton) standing at the altar. Five years later Dennis is working as a security guard in a lingerie shop and sharing the parenting of his son Jake (Mathew Fenton), but remains estranged from Libby, whom he stills loves.

When Libby’s new boyfriend Whit (Hank Azaria), a rich American “Mr. Perfect” enters the picture, Dennis becomes a little desperate fearing that his hopes of reconciling with Libby are slipping away. To try to win back Libby and to prove that he’s capable of changing, Dennis enters a charity marathon and runs against Whit, whose passion in life is running marathons. Dennis is coached by his best friend Gordon (Dylan Moran), who has ulterior financial motives for assisting Dennis and Dennis’s landlord Mr. Ghoshdashtidar (Harish Patel).

The big race does not go smoothly for Dennis, but his life is changed forever.

Children in this age category may also be disturbed by the above noted scene.

Run, Fat Boy, Run is an entertaining romantic comedy that sees the film’s hero running last in the race while still getting the girl, which makes him the real winner. The main messages from this movie are: