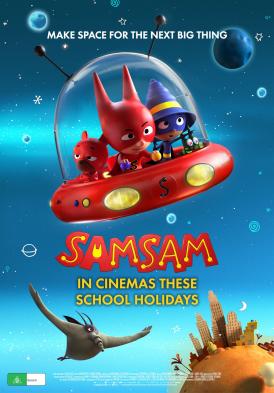 Parental guidance under 3; suitable for 3 years and over (scary scenes)

SamSam (voice of Tucker Chandler) loves playing with his friends but he feels bad he is the only one at Hero School who does not have a super power yet. Mega (voice of Lily Sanfelippo) lives with her parents on a nearby planet that has banned children and is thus the only child. She is lonely and desperately wants a friend but her father King Marshal (voice of Dino Andrade) is the dictator who sent all families away and continues to behave in such a way that children across the galaxy fear the mention of his name. When Mega happens upon SamSam and his friends she is determined to become one of them and hatches a plan which deceives her parents in allowing her to enter Hero School. Despite her differences SamSam helps her to fit in and Mega tries to help SamSam find his power. When unkind comments are said about her father and Mega defends him her friends are horrified. It is SamSam that tries to bridge the gap and give Mega the benefit of the doubt even when things look pretty grim. It takes a monster that threatens to destroy all the happiness in the universe for SamSam to find his powers and for Mega to prove how powerful true friendship really is.

Playing one parent against the other; deceptive behaviour; holding onto grudges.

SamSam is an animated film based on the popular French series by Serge Bloch. The film contains basic animation and a predictable plot that is largely targeted to pre-schoolers. It features some positive messages and will best be enjoyed by young children.

The main messages from this movie are to trust yourself and be patient as we all have special powers inside us; and that sometimes courage and friendship are the most useful powers of all.