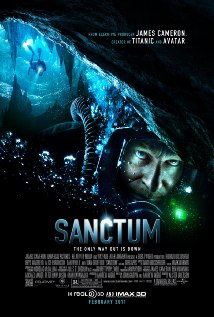 Not suitable under 15 due to themes, disturbing scenes, violence and coarse language

Seventeen-year-old Josh McGuire (Rhys Wakefield) arrives in Papua New Guinea to stay with his estranged father, world acclaimed cave-diving expert Frank McGuire (Richard Roxburgh). Frank and a group of fellow cavers are in the process of mapping and exploring a cave system deep within the jungle. Josh travels underground to meet up with his father, but tragedy strikes when one of the cavers drowns.  A cyclone then causes flooding which traps the cavers hundreds of feet below the surface. Trapped with Frank and Josh are Crazy George (Dan Wyllie), Luko (Cramer Cain), Carl Hurley (Iaon Gruffudd), and Carl’s girlfriend Victoria (Alice Parkinson).

With their way back to the surface cut off and the cave system filling with water, Frank decides that their only hope of escape is to follow the unerground river system to the ocean. The cavers then begin to make a hazardous journey through treacherous tunnels and underground rivers.

There is verbal and physical violence in this movie including:

In addition to the above-mentioned violent scenes, there many scenes of danger and injury in this movie that could scare or disturb children under five, including the following:

Sanctum is an action adventure targeting an older adolescent and adult audience. Produced by James Cameron (Avatar), the film contains some impressive cave and landscape photography but the storyline and character development are less impressive. Parents are strongly cautioned that the film contains adult themes, intense drama, disturbing scenes and frequent coarse language.

Parents who allow older children to see the film may also wish to discuss the real life risks and consequences involved in extreme sports and the rights, wrongs and impact of mercy killing as seen in the film.